This post is an addition to William Kenney’s piece, 6 Books That Should Be Made Into a Movie, Again.

William, another contributor here, and a decade my junior (not to mention, a far more avid follower of film than I could ever claim to be), blogged earlier about 6 films he’d love to see made again.

He spoke of Ender’s Game as a TV series, with the subplots brought back and respected, and the main story of Andrew Wiggin given time to air. He mentioned LOTR, with Del Toro at the helm, and that’s an idea I would line up to see.

Bond on the screen is mentioned too, I love Craig and Connery, Brosnan and Dalton; but if you asked me what I would like to see in the next bond movie, it would be the Bond of the book stepping off the page.

Anyway…to point…Liam had a good idea, and I’m stealing it!

The Colour of Magic / The Light Fantastic by Terry Pratchett 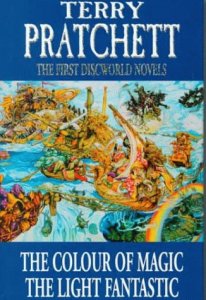 There are worlds, worlds, worlds and worlds; oh yes, and then there is the Discworld, which is carried by four giant elephants, through space, on the back of a giant Turtle.

Terry Pratchett wrote this as a just for kids story, way back when, and I have no doubt in my mind that if he had been American his books would now be a franchise to rival the MCU.

This book was made before, as a TV adaptation that didn’t come close to doing the books justice; poor casting, restricted run time and budget, all contributed to the original adaptation not truly bringing the source material to life.

ACTORS: Eddie Redmayne in the lead would be a fabulous choice, Benicio Del Toro could have a great role to play, and there’s a serious place that only Patrick Stewart could fill.

MAJOR CHANGES: A budget north of 150million, a studio and a director with the balls to hold true to a thirty year old children’s story; there is something quintessentially English in the story, that’s the voice that needs to ring true on the screen.

The movie isn’t terrible, there I said it, and I stand by that statement. Tom Cruise brings his usual, and ridiculously astounding, amount of charisma to the lead; and the film itself is another good vehicle for him, as his career slowly winds down.

And right there is everything that is wrong with the movie, he is the wrong man, in the wrong role, at the wrong time of his life.

Reacher is big, he is powerful, he is a blunt instrument – and Tom Cruise cannot be those things.

ACTORS: Chris Pratt is the lead that could turn a decent action movie into a great one.

MAJOR CHANGES: Cut the PG-13 crap, let this sucker off the leash, and let the plot go where it needs to go. Deadpool proved that you can take adult source material and make an adult movie.

The Three Musketeers by Alexandre Dumas

How many movies have been made from Dumas’ classic, four or five? and that’s just in the English language; I can’t even begin to image how the French must revere such a classic.

Pretty much everyone knows the plot, I thought I did too, until about a month ago, when I finally gave the book the respect it deserves. There is so much more to the story than what has made it the big screen.

The world has changed since Alexandre’s day, and lets not skip over the fact that Musketeers is historical fiction, so ideas like love and chivalry don’t exist in the same way anymore (and we are more the poorer for it), which is why a great remake would be just the ticket.

There is both light and dark in the soul of every character in this book (perhaps with the exception of Porthos), which I would love to see played out on the screen.

ACTORS: Not sure, four men in the early twenties, who’ve had their (hopefully) private issue with drugs, and Downy Jr as the cardinal. Truthfully, the male roles could be taken by many people; the casting of Milady would be the key, with Helena Bonham Carter coming to mind.

MAJORS CHANGES: There is only one truly evil character in the book. Evil incarnate, petty, pathetic, fearful, spiteful and a merciless killer; and he is a she.

The Picture of Dorian Grey by Oscar Wilde 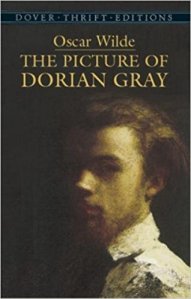 The film is crap. I don’t know who thought it was a good idea to make it in the way they did, and I can’t even begin to fathom how it got financed.

ACTORS: 15 years ago Johnny Depp could have turned in a remarkable performance. Now, well truthfully, I’m not in touch closely enough with modern cinema. A someone with a porcelain beauty would be essential.

MAJORS CHANGES: You need to identify what Dorian Grey truly is, and that is not beautiful.

The League of Extraordinary Gentlemen by Alan Moore

I’m ‘four-and-a-halfing’ this because it’s crap, and Dorian Grey is the worst thing in it, which is a hell of a statement.

Is this the worst adaptation of the source material ever? Sean Connery played a huge page in the movie getting both produced and budgeted, to a hefty sum – especially when considered that this was before LOTR and the MCU – and Sean Connery openly hates it.

ACTORS: If I may quote Patches O’Houlihan, “it’s like watching a bunch of r******, trying to f*** a door knob out-there!!!”. After the original, you could round up any posse of desperados you wished, and it would still be an improvement.

MAJORS CHANGES: My god, I wouldn’t even know where to start; one word – EVERYTHING.

The Men Who Stare at Goats by Jon Ronson

So, this movie stars George Clooney, was directed by his mate, and produced by the two of them; it’s a great example of star power getting its way.

Gosh the book is so funny, from the first page to the last, you laugh, and laugh, and laugh some more. Jon Ronson really knows how to spin a tail and you can’t help getting carried away with his narrative.

This book was so good, that the first time I read it in one sitting; cover to cover in an afternoon: – God blessed the Irish rain that day.

ACTORS: How old is Gary Oldman now? I’m not sure, but I’d love to see him carry the story from start to finish.

MAJOR CHANGE: Go total first person, present it as non-fiction, just like the book. Have one great actor, with a series of superb cameos; the likes of Bill Murray, Johnny Depp, Jeff Bridges (who was in the original movie), John Turturro, Christopher Guest… there’s an idea, I’d go full Spinal Tap with the remake.

[Note: William included LOTR in his list, and I know that he enjoyed the original movies. I too would love to see it re-done… but the only way I can imagine it being done justice is with 6 movies]

2 thoughts on “6 (More) Books That Should Be Made into a Movie, Again”