Looking for a few books to read in the sunny summer months? Perhaps with a quite glass of you favourite tipple? Well, you can’t wrong with…

1 – The Psychopath Test
by Jon Ronson

“That guy is a Psychopath”, have you ever said that? Has anyone ever said it about you? …it’s probably been said about me – in fact it certainly has, because I talk to myself (usually best to talk the smartest person in the room….and I’ve spent a lot of time hanging around in empty rooms) – does that make me Psychopath? Odd, yes. Eccentric, certainly. Crazy, well…yes, ok.

BUT. Not a psychopath.

The Psychopath Test is Jon Ronson [The Men who Stare at Goats] on good form, just mulling over what makes somebody a Psychopath. It’s funny, insightful and a good one to read over a pint because you’re going to want to talk to your mates about it.

Recommended drink: A large bottle of cider, with a larger glass of ice.

Yes, it’s the literary equivalent of a bag of cans, but we all know that a bag of cans can be just the ticket on a sunny afternoon.

And the book isn’t terrible, this terrorist fellow is going around blowing stuff up and, quite obviously from the title, he has a particular dislike for bridges. It’s a fun read, if you don’t take it too seriously, most noteworthy for having one of the least satisfying endings I’ve ever come across – seriously, you’ll keep checking for extra pages for at least ten minutes, and end up wondering why Patterson decided to stop the story ‘there’.

Recommended drink: A bag of Can’s (whatever brand is second-cheapest in the off-licence.)

In shorter. Aberystwyth is seaside town in Wales, or at least it is in our shared universe. Malcom Pryce writes (or wrote maybe, I don’t know if he’s still doing it) these noir detective novels, that paint a completely different view of a place most people can’t read the name of, let alone spell.

Mon Amour is a fun book, with a ridiculous detective plot, which keeps you guessing throughout, with lots of completely indeschiperable in-references (and names) to boot.

Recommend drink: A Gin and Tonic, with a thick slice of lime.

I feel like everyone in the world has read this book. Mostly because I’ve recommended to almost everyone I know – and almost ever reader I know had already read it.

This is one of those books that everybody likes on some level. It’s so warm and jaunty, and really fun too… I think that’s the word that best describes this book – Fun.

Alan Karlsson is this (you’ve guessed it) 100 year-old who climbs out of a window and disappears. He might be the nicest character in literature, and the book is a retelling of some of the crazy things he did in his long life, with his geniality never once failing.

Recommended drink: Anything and everything alcoholic (trust me, Alan would approve).

5 – The Time Keeper
by Mitch Alborn

I heard someone saying the radio recently, “when you’re young you don’t care about time, it’s only with age that you realise it’s time that doesn’t care about you”.

The Time Keeper is a book about the man who invented the first clock, and his punishment for that most terrible crime – of putting a measure on God’s geatest gift to us.

It’s cracking read, a credit to the author, and will make you truly appreciate a sunny day. 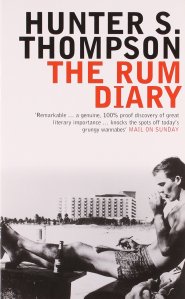 It’s a book about drinking rum (well ish), written by a man who enjoyed the odd tipple (insert whatever the opposite of ish is). It’s the not the great man’s best work but it’s still a lot of fun and has the burgeoning of that warped perspective from which the good Doctor would one day leave his eternal mark.

Recommended drink: For God’s sake, get yourself a bottle of Rum, sit out on the grass and just let the world move around you.

This is a story about Hank Chinaski and what he did with his summer off. Which lasted decades.

It’s got booze and broads, bad decisions piled upon bad decision, but mostly it’s just a great writer letting it off the leash – And ‘the voice’, that was Bukowski’s great gift, you won’t just carry the book home from the beer garden, you’ll carry the man with you.

I’m not big for quotes, but the last lines, “In the morning it was morning and I was still alive. Maybe I’ll write a novel, I thought. And Then I did.”, is one of my all-time favourites.

Recommend drink: The dirtiest bottle of Whiskey you can find.

8 – Looks Who’s Back
by Temur Vernes

So, Adolf Hitler (Austrian fellow, had a few issues) wakes up without explanation in the year 2010, and isn’t exactly impressed with the Germany he finds… and everything else just kind of spirals from there.

It’s hilarious for one reason only, and I really do mean one, because Temur Vernes plays it dead straight from the first page to the last. Yes, it’s the blackest form of comedy, but the joke isn’t on the tragedies or crimes of the 30/40s, it’s on the absurdity of this modern world.

This is a book you have to read in the summer because it’s too dark in its heart to read at any other time of the year.