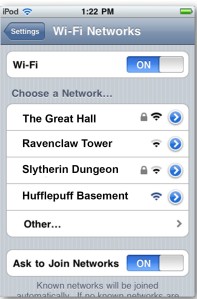 When I talk about books with strangers I tend to bring up Harry Potter a lot. My reasoning is simple; pretty much everyone is going to have heard of the bespectacled one. I read a quote once, “the world is split into two halves, those people who’ve read The Lord of the Rings, and those people who are going too…” and gosh, how I wish that was true.

And you know what, they are good books, they really are. Professors Bumblebee and Snape are supremely crafted literary characters, with the way Harry, Ron and Hermione fall from one life threatening situation into another being wholly believable.

But for a long time now I thought JK got lucky. It’s the complete lack of mobile telephones and the Internet you see…

…Remember in book seven, when Ron has his Horcrux induced bitch fit and storms off in a huff? “I wanted to come back right away but I couldn’t find you,” remember that bit …wouldn’t have been believable in our muggle world; we’d just have got on the phone…

…all those hours swatting up in the library, wouldn’t have happened, laptops in the dorm room job… parental filters switched off…God alone knows what hits you’d get if you Googled ‘Defence against the Dark Arts,’ ‘Potions,’ or ‘Charms,’ in the Potterverse.

Just imagine how different the world would have been for the pupils at Hogwarts; social media and online gaming would literally have changed everything about how they used their free time.

Like I said, I think she got really lucky with the timeline (lest we forget the Hogwarts years, in which the story mostly takes place, are the mid-90s), and so didn’t have to answer silly questions like the ones I posed above.

The books (and movies too) deal with it skilfully; Wifi, mobile devices, etc… they just don’t exist – throughout the entirety of the world. The matter isn’t even left open to debate. At no point, in the story of the fall and rise and fall of Tom Riddle, do you every pause to think, “but they haven’t charged up their phones!”.

For the record, I’ve no doubt that JK would have been able to dismiss the matter with the merest stroke of a pen (…“nah Harry, mobile phones an’ stuff like that don’t work at Hogwarts,” said Hagrid as the boat moved slowly towards the castle, “to much magic in the air for all that Muggle bumpkin to work”.) because she observed the most important rule of writing great FantSci / Magic-Realism:- “because I bloody well said so – this is my world not yours, if you don’t like it get out.”

Every great piece of writing in the genre (or great movie for that matter) observes that one unshakable principle, and Harry Potter is no exception.

Still… I think she got lucky. No that’s not quite right; I think we, the readers, were the ones who got lucky.