But thank you most of all for your worlds beyond worlds of imagination that have sparked my interest for years. Your books have made my constantly reevaluate my main-stream-media-fueled views of time travel, extra-terrestrials, and (perhaps the most outlandish concept of all), human relationships.

Your mind was fascinating and I am so grateful to be able to live in the worlds you created, even if its only for 300 pages. Rest in peace, dear man. And again, thank you.

Full disclosure, this is my favorite book of all time. Of. All. Time. 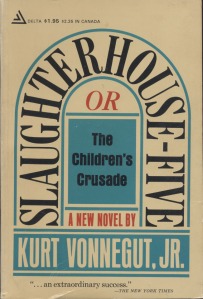 It’s creative, and heartfelt, and desperately human. The book is not written with a linear time line which some might find a bit jarring. But, if you can just go with it, I promise it’s an amazing read.

The book tells the story of Billy Pilgrim, a normal young man leading a normal young life until he gets drafted in WW2. Billy’s innocence and vulnerability starkly contrast with his environment and I guess one could say its a bit of a survival story.

It is by far the most interesting thing that has happened in his life… That is of course until he gets abducted by aliens and taken to a people zoo on their home planet of Tralfamadorian. It just gets weirder from there.

But, honestly, the weirdness is not even what I love so much about this book. Vonnegut expertly challenges our preconceived notions of time, space, and narrative in a way that leaves you pleasantly confused. You will think about this book for months, maybe years, trying to sort everything out. But the information is handed to you in such a gentle and unassuming way that you don’t feel threatened, just ponderous.

“And Lot’s wife, of course, was told not to look back where all those people and their homes had been. But she did look back, and I love her for that, because it was so human. So she was turned into a pillar of salt. So it goes.”

And so the weirdness continues. Sirens of Titan has Vonnegut’s trademark writing style but this we are set in the future and not the past.

The Martians are marshaling an army to invade earth… but good thing we have good old Winston Niles Rumfoord, who has managed to transcend the space- time continuum, to materialize at his scheduled time and warn us of the coming danger. Malachi Constant is summoned by Rumfoord and they set off on an intergalactic mission to save the planet.

So, in Sirens of Titan, we can discuss ideas of free will, predestination, what it means to be lucky, and that maybe if we all took a second to remove our heads from each other’s sphincters that we might be able to appreciate that earth is not the center of action in the universe. You know. Just little things like that.

“The only controls available to those on board were two push-buttons on the center post of the cabin — one labeled on and one labeled off. Theon button simply started a flight from Mars. The off button connected to nothing. It was installed at the insistence of the Martian mental-health experts, who said that human beings were always happier with machinery they thought they could turn off.”

This book is actually a collection of Vonnegut’s short stories, all with their own charm. Some are bad, some are good, and some are great. All are worth reading (even though, admittedly, some just don’t make a whole lot of sense to me).

But one of the ‘greats’ I refer to is his story titled Thanasphere, about the first manned spacecraft and the lucky Major Allen Rice who has been chosen for the weather observation mission.

It is, in a word, unsettling. But, in my opinion, the best works of art, be they paintings, books, short stories, poems, are the ones that stick with you, that haunt you long after the story is over, that never seem to settle in even after a long time has passed.

Another gem in Bagombo Snuff Box is the short story titled 2BR02B (to be or naught to be). It’s a story of a world that has cured aging, and as a result no one ever dies of natural causes. To prevent overpopulation, when a child is born an elderly member of the community volunteers for suicide. Again, unsettling. But an interesting perspective in our world that seems constantly obsessed with prolonging the lifespan.

Like I said, not all the stories are great. But some of them are going to stick with you. 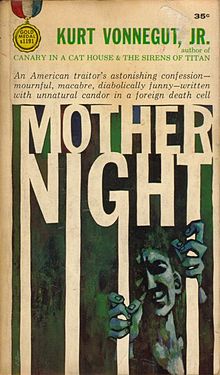 Here we follow Howard Campbell, Jr, an American writer who moves to Germany pre-WW2 and becomes an integral part of the Nazi propaganda machine. Little do we know (not a spoiler, I promise) that the United States government has enlisted Mr. Campbell to convey information about the Nazi movements and plans through subtle changes in his delivery on his radio show.

A cough, a pause, a mispronunciation. Will he be caught? Will he continue to take the risk? Is his secret service contact even a real person? Is he just having paranoid delusions?

It’s an interesting read that shows us the slippery slope of apathy, the danger of unbridled patriotism, and how true love can blind us to reality.

“Let there be nothing harmonious about our children’s playthings, lest they grow up expecting peace and order, and be eaten alive.”

REVOLUTION!!! This also occurs in the setting shortly after a world war, although this one is in the future.

I suppose it’s worth acknowledging here that Vonnegut seems to be moderately obsessed with subject matter surrounding WW2, but then again so am I. So it all works out for the best.

Anyway. In a post WW3 world, industrialization has replaced the need for much manual labor and the consequence is a highly segregated population. The masses have been displaced by industry and feel they have no purpose in life, no goals, no reason to get up in the morning.

Our protagonist, Paul Proteus, struggles with the questions about the meaning of life. What gives a life meaning? And who gets to decide that? Where is our blind faith in technology leading us? And are we sure we want to go there?

The title of the book derives from those pianos you sometimes see at the mall or in airports- the ones where the keys move themselves. The outcome might be the same, the music just as beautiful. But the question I think Vonnegut is begging us to ask is this- in removing the human touch, have we lost something important? Where is the artistry in a player piano?

“I want to stay as close on the edge as I can without going over. Out on the edge  you see all kinds of things you can’t see from the center.” He nodded, “Big, undreamed-of things — the people on the edge see them first.”