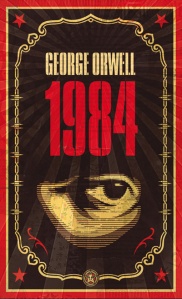 If you don’t know what I mean when I say that, it’s because you either haven’t read the book or haven’t visited the planet Earth. Big Brother, Doublethink, Room 101… all terms that have made their way into the English language from Orwell’s pen. I think he even deserves a little credit for predicting the invention of the Nintendo Wii! (…well, maybe.)

Personally, I can never get past the widespread use of the term ‘App’ without thinking of the concept of ‘Newspeak’. If there was one word used to describe how the world assimilates information in the digital age, it would be that.

1984 is a book that I would suggest everybody has to read, it’s that worthy and should be free to stand on even the highest of pedestals.