As a child I was afraid that Napoleon Bonaparte was under my bed.

We had a large black-and-white creepy painting of him (painted by my Uncle Mike) in our living room and Napoleon’s eyes followed you around the room.

Adding to the scary nature of the painting, my Dad used to read us this poem at night: 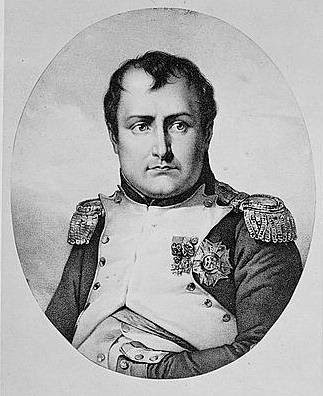 This was not the painting in our house. Ours is much scarier than a portly man touching his stomach.

Baby, baby, he’s a giant,
Tall and black as Rouen steeple,
And he breakfasts, dines, rely on’t,
Every day on naughty people.

Baby, baby, if he hears you
As he gallops past the house,
Limb from limb at once he’ll tear you,
Just as pussy tears a mouse.

At school I shared this fear with confused classmates who had never heard of Napoleon nor understood why I would be terrified.

Reminded of this as an adult, I started to Google and found that during the Napoleonic Wars, British parents would tell scary stories of Napoleon to their children. The stories centered around the idea that if you were bad, Bonaparte would come in the middle of the night and eat you (which is where the above poem came from).

There are MANY different theories as to the etymology of the word ‘Boogeyman’ as well as different cultures around the world having their own form of Boogie (Sack Man in Brazil, El Coco in Spain, Butzemann in Germany…)

But this is a particularly prominent theory as to the origin of ‘Boogeyman’ and those old British war horror stories certainly had their effect on me.

So maybe 8-year old me thinking a French Imperialist was going to snatch me in the middle of the night wasn’t so crazy after all.

One thought on “Why You Should Be Afraid Of Napoleon Bonaparte”