When did Neil Gaiman become mainstream? … Actually, I take that back, I’ve read a lot of his books and there’s nothing mainstreamy about them. I suppose what I mean is, known by the wider public.

For myself, I’ve been aware of his writing for perhaps 20 years, but I still consider myself to be late the party given that two of my friends, who were Comic Book readers / collectors / obsessives (nothing wrong with any of those things BTW), were already hypnotised by something called The Sandman.

Novels have always been my thing, so my own adventure began in a different place. 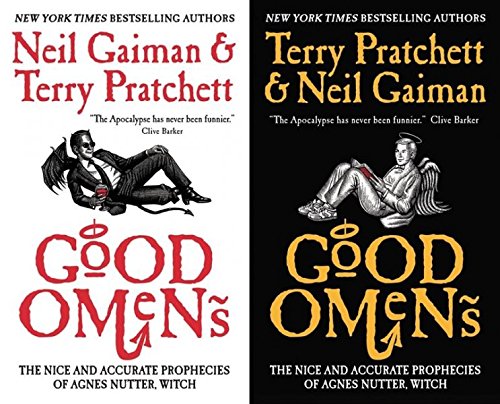 I make no secret of the fact that I love Sir Terry, his passing from here to there is one I felt and remember in my heart. Without his name on the front cover I never would’ve have picked up Omens at all, and never begun the process of my own hypnotisation.

The plot; well it has something to do with the antichrist and the influences the forces of good and evil can, will and/or do have over the world.

Everything I loved about Pratchett and everything that I would come to love about Gaiman, all in the same place. I’ve read this book half a dozen times and can say for certain that I’m not done with the re-reading.

Good Omens was my first encounter with N.G. and The Sandman is, to date, my last – and I do mean TO DATE.

I don’t pretend to be an expert on Comics / Graphic Novel but a blind man could understand the stunning scope of this complete story arc. With hindsight, you appreciate the planning and vision that’s in evidence right from chapter one, which I suppose would be rightly titled as the first issue (or so I guess).

Morpheus, of The Endless, is one of the seven aspects (that’s a term I’m using – I’m not sure if that’s how they are described) and the story begins with him becoming inexplicably trapped and ends with… you know what, I hate spoilers, anyone who is interested is just going to have to pick it up.

I will say this: I don’t read Comics but after an initial transition in the way I processed the story structure, I was able to really enjoy The Sandman.

[It’s a side issue but the way it utilizes ‘silence’, is unparalleled in my experience.]

Reality trumps fiction, “some things you just can’t make up”, or at least so they say, but what if you used the peculiarities of the world around us to create a new type of reality, one where the fantastical only seems fantastic in its absence>?

I think that’s what I enjoy the most in N.G writings, the way he takes inspiration from ideas, both old and new, which are hidden in plain sight.

Neverwhere is a story about a boy, a girl and the streets of London… now what tale could spin from that? Aerosmith would probably write about love in an elevator, living it up when you’re going down and what not… I’d write about commuting… Neil Gaiman wrote Neverwhere.

I suppose you’d call it a fairy-tale but I don’t think it does the story justice, there’s more going on in this short book than there is many a thousand word FantSci tome, which should stand as an example to lesser writers – sometimes the best images are painted with the fewest colours.

If I was asked to pigeon whole The Ocean I would say, “this is a Neil Gaiman book.”

The best and my favourite N.G. novel (again to date).

From page one there’s more going on than you realise, no matter how much you realise is going on. American Gods has my favourite type of magic in it, one I was always credit Terry Prachett’s writing with – the book can be read in two completely different ways (at least), both of which are a credit to the writer.

That extra magic I spoke of comes in in the re-reading, when the sign posts, plot holes, wells and twists in the story are experienced from a completely different perspective.

I don’t have the word count left to explain clearly what I mean here; but in the simplest terms, this is a book that needs to read twice.

I’ve heard that God’s is going to be made into a TV series. It will either be a work of purest art, that will bring half forgotten / remembered tales back to the future.

Or once again they’ll turn a great story into nothing more than a vessel to launch another special effects driven merchandise machine.

[Afterthought on comics / short stories: I know I’ve included The Sandman above but, honestly, I don’t read Comic’s or short /children stories as often as I perhaps should, which is why I haven’t mentioned them further.

The short, or graphic, form seems to be the medium(s) in which Mr Gaiman prefers to tell stories which, in no small part, is why I began my own adventure into comics last year.

As a lover the longer form, I can only hope I’ll be lucky enough to read more and more of his novels as the years go by.]