What if the world we lived in was just a dream; but not one born of mind, body and spirit – but of circuits, wires and WIFI?

How would you know the difference, what is real, how do you define real… and I’ve started quoting Morpheus from The Matrix.

[On a completely side issue: I only recently put two and two together, with Morpheus being the Greek God of Dreams – a real “Doh!” moment… although it’s always good to be reminded of the unfathomable depths of my own ignorance]

The Wachowski’s, back when they were he’s instead of she’s (and more power to them btw), wrote a GREAT movie around the idea of us living in a computer generated dream world… but they weren’t the first, last, or only people to write on the subject.

I suppose the first was… Neuromancer by William Gibson. Published in 1984 and wildly attributed as being a big influence on The Matrix… or at least so I read, which was what caused me to buy the book, and alas we see the power of reviews, blogging and articles.

“The Matrix is a world within the world…” the first lines of the first summary I pulled off the internet (our own world within in a world), apparently the book is “the cornerstone of the cyber-punk genre”, but I wouldn’t know about that; sandcastles being about the height of my building prowess.

There’s no denying that William Gibson was way ahead of the curve though, he wrote this sucker 35 years ago when Super-Computers were still called Super-Computers, and something worthy of taking your kids to see.

The plot seems rehashed now, in the world post Larry & Andy, and Lana & Lily – oh and the whole cyber crime plot is a bit crap – but this was the building block upon which bullet-time was born.

While you might have heard of Neuromancer, you probably haven’t come across Brasyl by Ian MacDonald, and the blunt truth is that it’s just not as good.

I happen to like the book though, it appeals to my love of the Brazilian form, undoubtedly the most beautiful animals on the planet, with an blend of genes and ethnicity that I can only hope that the whole world shares one day… and Braysl tackles that point in sub-text.

Set over three distinct time lines, which can be loosely termed past, present and future, this is a book about the end of all things. There’s enough spoiler in the title of my blog for you to put two and two together about what’s likely to happy in the novel… all I can promise you is that the answer isn’t four.

#3: Hard Boiled Wonderland and the End of the World by Haruki Murakami 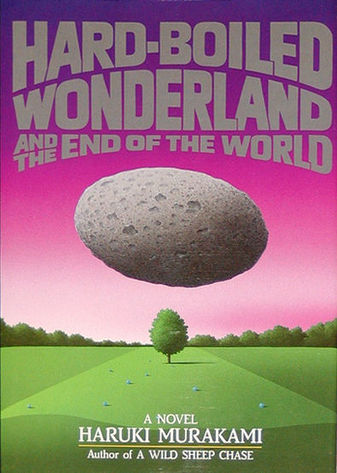 Haruki Murakami. I’m just going to type that again – Haruki Murakami. The best writer publishing in the world today, certainly a debatable point, but the fact that he can even take a corner of the ring to argue that point should tell you how good this Japanese fellow is.

Borrowing from Wayne’s World, and hoping Mike Myers doesn’t sue (I read an article recently saying he’s a right dick – I hope that isn’t true… for one, I can’t afford to be sued) “If you write them, they will read”, and Murakami wrote Hard Boiled Wonderland and the end of the World.

You want to know what’s sick? – it’s the weakest Murakami book and it’s still excellent. The plot is about a man’s mind being used as an uncrackable computer coding and storage device… …and the end of the world – anyone could type the words around that gap but only a master can fill it.

This is pure Sci-Fi , it’s ticks all the invisible books that science fiction fans love to read; like a website browser with the autocomplete function switched on and it’s pretty good too. Again it’s a pickle not to spoil the central premise of the book but there’s a lot more to it than just what’s been made obvious by the title of my blog.

I mentioned its Sci-Fi 101 and that includes the common weakness, that I have to point out given that the story is 3 books and 3000 pages (the complete trilogy) long; which is, everyone is too advanced, too powerful, capable of things too far beyond imagination… a lot of FantSci writing falls into the trap of forgetting it’s all basically about imagination; if there’s nothing left beyond imagination… then there’s nothing left to read about and imagine.

And right there is why I think people continue to love the idea of leaving our world and living in one made up of circuits… it’s a place that has always been beyond imagination.

Who knows, it might not even be for now.