While I don’t drink anymore, I do still spend a lot of time hanging around in bars. I can’t help it, I’m the son of two alcoholics and while I wasn’t born on a barstool, the initial stages of my conception probably took place on one. Those same said stools dominated my childhood, then throw on another 10 years working as a barman, and… well, I spent a lot of time in pubs, they feel like home. 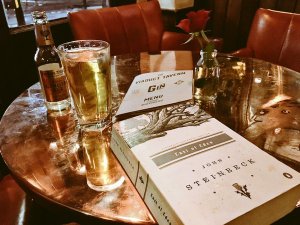 Sweeping generalisation time: most people you meet in the pub aren’t big book worms. I’m not saying they don’t read, or can’t for that matter, reading just isn’t their all consuming passion in life; and why the hell should it be.

That said, when you do meet a Patron who knows their books, they really know their books.

3 years ago… I’m in this bar and get chatting to this fellow I know second hand, name of C… (i’m taking out the name, you’ll see why), who starts telling me about the ‘Malazan Book of the Fallen’, “You’ve got to read it mate – best fantasy series ever!”.

When you’re a FantSci head, you hear, “best ever,” a lot; goes with the territory, we can be a passionate and parochial breed, so when he said it (‘it’ by the way is ten books and couple of million words) was that good, I added a large pinch of salt to the pot.

Turns out yer man was right! No messing, as Epics go, it blows all others out of the water – Robert Jodron, Kevin J Anderson, George RR “where’s the bloody dragons” Martin, Terry Brook’s… I’ve read them all and a dozen writers more, but Steven Erikson is the best of them.

I’ve always meant to thank C…, but have never got the chance. The last time I saw him, he was in the midst of a mad bender and on this way home with some mates to try and make Crack out of a quantity of Cocaine they had come into possession of… which, I’m sure, made a lot of sense at the time (I mean it must, right?).

[yes, you read that correctly… and for the record, C… is a genuinely top bloke, not to mention a PhD level physicist. Life lesson folks, just cos you meet someone in a pub who likes a drink, doesn’t mean they’re stupid… equally, just because you’re highly intelligent and a graduate of Ireland’s finest university; it doesn’t necessarily mean you have all your shit together.]

Anyway, never judge a book by its cover and what not… and who are we to cast judgement; lovers of Sherlock Holmes, Robert Lewis Stevenson, Irvine Welsh, Thomas Pynchon (like most people, I know next to nothing about the man, but if he never ‘dropped’ I’d be astounded)…

Next time you’re in a bar and some chap offers you an obscure book recommendation, it might be worth your effort just keeping half an eye out.

Oh yes… and about trying to make Crack… don’t do it… just don’t. (For one thing if you try when you’re drunk and muck it up, you’ll only end up destroying your perfectly good Class-A ingredients… or, at least, so I’m told…)