I don’t like to use my blog to just write book reviews, for one thing I’m not the best voice on Literati Pulp for doing so, but mainly it’s because I’m interested in what books are about, and not just whatbooksareabout.

…which brings me to Luke Rhinehart and The Dice Man. 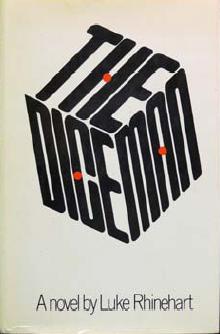 Everything you need to know about the book, it’s wider effect and impact, can be read in the reviews section on Goodreads (love that site – the barcode scanner is a brilliant idea). Usually, there’s at least some theme to the reviews; be it good, bad or positively indifferent but The Dice Man blows that idea out of the water.

One person loves it, the next hates it, and for pretty much the same reasons… with that back and forth going on between several thousand reviewers.

If you are unaware of the novel the basic premise is pretty simple; this dude becomes frustrated with his life and can’t see a way out, so he starts rolling dice and letting their random fall indicate what course of action he should take next.

It starts off with either or choices (I’m going to write this spoiler free, just in case you haven’t read the book), stuff like “odds go to work…heads stay home”, before progressing to include possible choices as extreme as rape, incest, and murder… like I said this book polarizes people.

Personally, I liked the idea of dicing, thought the concept was very good and one that I’d like to play around with myself. The existence of palpable chance in a novel is a powerful and intoxicating thing… Luke Rhinehart’s (or George Cockcroft if you prefer) idea of dicing takes that element of chance and adds an extra layer of excitement to it by making you feel as though you’re aware of all the possible outcomes a single choice could have (pure nonsenses of course – just skilful writing).

Being aware of the road not taken makes us more appreciative of the journey we are on, and right there is the hook of the novel – like I said, it’s a really good idea.

Yes (going back to the reviews) the book is racist, sexist, homophobic…blah blah blah etc – all of which are valid criticisms (as is the self-indulgence in the writing) but I’d argue that it’s worth taking the time to read The Dice Man (once, mind you) just to explore the concept of Dice Life.

[Quick note: I had planned to spend a day (#LiteratureGames) letting “the dice decide” my fortunes, unfortunately, my bank balance got in first and forced me to go to work instead.]