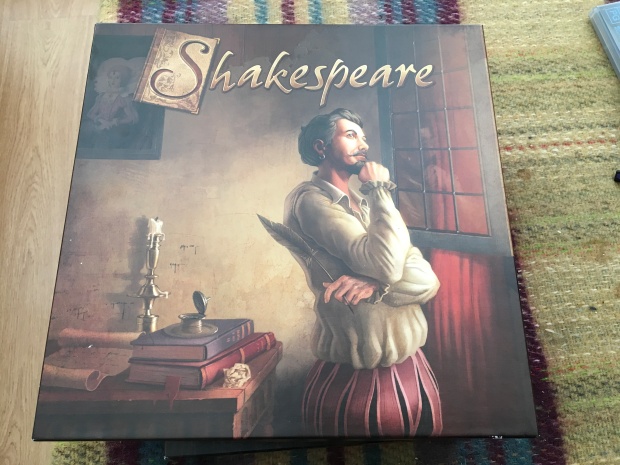 Game Plot: You are an actor/playwright in Elizabethan England – guess which one – hiring actors and technicians in an attempt to put on the best possible play and get the Queen’s favour.

Finally, a game where you’re competing against each other! Although since all of you are represented by the same picture of Shakespeare, you’re sort of fighting yourself. Which is odd.

Each round you select and activate famous Shakespearean characters who all give you different point bonuses at the end of the week. There might, perhaps, be a touch too much going on in this game, but if you get the expansion you can hire the Bear of Winter’s Tale ‘Exit pursued by…’ fame, for which I’ll forgive anything.

Similarity to the book (or in this case original plays): You can have Juliet as a character in a play opposite Falstaff and Hamlet. With none of them wearing any clothes. So unless you’re watching an especially pretentious student production, I’d say it’s not similar at all.

See also: Council of Verona – a game you play as the characters of Romeo and Juliet!