****Possible Spoilers for The Three Musketeers, Lord of the Rings, Harry Potter, Catch-22 and 1984.

No. 1: The Three Musketeers

So, I’m reading The Three Musketeers, by the legendary Alexandre Dumas, and loving it – all of a sudden, “One for all! All for One!” they cry, and I can’t help looking around to see if there’s anyone I can talk to about it! “Guess what just happened lads! …and then they… and then there’s this bit…and d’Artagan is like, ONE FOR ALL…and they’re like, ALL FOR ONE!”

Of course, no one really cares but you still want to tell the world anyway, sometimes you literally just want to jump up and down and start shouting! Other times it’s more personal, like a treasured secret that you want to share with a special person; just whispering it in their ear, so softly no one else can here.

No 2: The Lord of the Rings 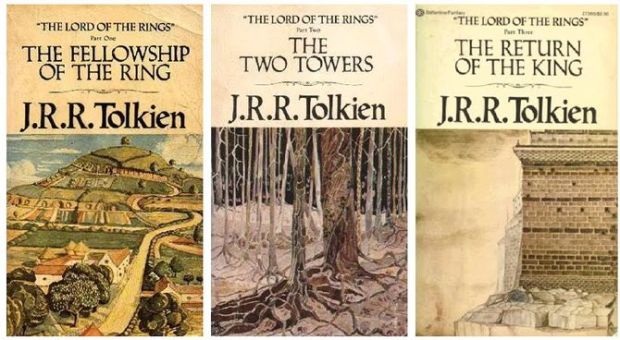 What about the bit at the end of The Lord of the Rings, when Frodo finally gives in to the will of the One Ring and try’s to claim it for his own, right there on the edge of the fires, in the heart of Mordor and they belly of Mount Doom… my gosh, could you believe it? I mean, could you believe it???…and then! Well, we all know what happens next!

Cue jumping Lee…hanging around in the kitchen, hoping one of my flat mates would be around to talk to about it. And this was back in my college days, in a world before Peter Jackson, so it was like this wonderful secret bubbling up inside of me. I wanted to tell the world I was part of that special club, that group of people who had read perhaps the greatest 1000 page book ever!

It was the same with Harry Potter…and the Half-Blood Prince. We all suspected something big was going to happen, it was the sixth book out of seven. Voldemort was back, Cedric was dead, the battle in the Ministry of Magic had happened and Sirius had passed through the door between life and memory. In other words, dat shit had got real yo (I heard it in a rap song – alas, the grammar wasn’t explained).

I bought that book the morning it came out. I went straight home after, sat in my chair, and read it from cover to cover… and holy sandwiches! SNAPE KILLS DUMBLEDORE!

“Severus please”, Boom! God, I thought I wanted to tell people about LOTR back in 1999, but this was a whole other level of jumping around and wanting to shout about what I knew. EVERYONE was reading Harry Potter then and I knew something that was going to blow their minds!

On that occasion, I restrained myself (well short of mandatory jumping around in my room) because my little sister was reading the books as well.

In the interests of disclosure, I went into work on the Monday after the book was released and this moody moo bag I didn’t get on with was on like Chapter-3 …well, I was sorely tempted to give her both barrels of the spoiler gun.

(I know a lot of followers of Literati Pulp are based in the USA, so it might amuse you to know that the day after I restrained myself someone hung a sign over a motorway bridge nearby that read, “DUMBLEDORE DIES!!!!”. So huge was Harry Potter mania at the time, it made the national news.)

That ‘Snape kills Dumbledore moment’, was a double Woo-Hoo / jump-around moment for me, because I was again ahead of the curve when Harry Potter…and the Deathly Hallows was released, and was in the first group again, those who truly understood the sacrifices of Severus Snape.

Other times the incredible moments are more difficult to share because they’re just reactions of pure unexplainable instinct.

“The Texan turned out to be good-natured, generous and likable. In three days no one could stand him.”.I couldn’t explain it at time but I knew, right there in the first ten pages of Catch-22, I knew that I was about to read something that was going blow my mind.

It’s now a dozen years later, in this world of Trump and “Post-truth”, and blah, blah, blah, etc… and I see posts on social media all the time, raving about 1984, its incredible prescience, it’s relevance to the modern world, and I still want to talk to people about the amazing moments in book; but I can’t find the right words of expression (due in no small part to the fact that most of the people ‘posting’ about Eighty-Four clearly haven’t read it!)

I’m sure everyone who’s ever read a book they’ve loved, even if it was their only book, has had at least one of those special moments they want to tell the world about, to shout from rooftops, to jump for joy …maybe to even read over and over again (if they are lucky), as I have with all the six I’ve described.

I know I read more books than average person, and I’m told I read even more than most other serious bookworms (rightly or wrongly), so I’ve probably experienced more of these amazing moments than most.

I can’t tell you how happy I feel, having read The Three Musketeers this past week, being reminded that there’s still so many more to be discovered.

One for all. All for one.

3 thoughts on “6 of the Best Moments in Literature”